Ottoman trays are a flexible piece of homeware that can turn a footstall or a soft pouffe into a functional coffee table. But there are many more uses for this popular item around the home.

Staying true to the inspiration behind Dama Designs furniture, I wanted to create an Ottoman tray that was different to the usual large trays found in retail shops and online. I had some interesting live edge Elm pieces that were too narrow to make into a table-top but were ideal for a tray. In fact, if I ‘thought outside the box’, I had enough wood to make two trays!

I wanted to incorporate resin into the design as I hadn’t come across anything similar when researching ideas. I am a real admirer of symmetry and the art of ‘book matching’ to expose the interesting grain and texture of wood is something I like to do when a piece lends itself to this technique. I thought these two trays would look pretty stunning with their individual book matched designs.

I cut the elm into four lengths and placed two into each  mould I had made for the resin pour (see pics). Once these miniature ‘river’ slabs were fully cured I would need to carefully split them in two using a band saw. Surprisingly, the two trays required around 5 litres of Elichem’s Deepcast resin. 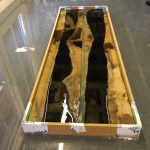 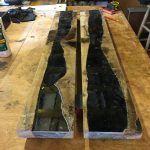 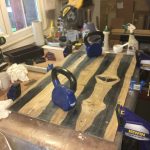 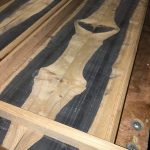 The cured boards were demoulded and passed through the saw bench to tidy up and square off the sides. Each board was then split in two. Next a planer/thicknesser was used to achieve the required thickness for the tray bases. Now having two pairs of book matched boards I glued and clamped each and left to cure overnight.

The tray sides were also fashioned from elm and routed to create a mitred edge. I cut channels into each length, wide enough for the tray bases to fit snugly into the recesses created. A table saw was used for this process.

All the individual pieces were sanded, starting with 40 grit and working down to 1000 grit. Particular attention was paid to achieving a near scratch-free finish on the resin surfaces.

I assembled both trays using Titebond III and clamped the assemblies until fully cured.

I polished the resin using 3M’s range of polishing compound which creates a good low gloss finish. Then I used Osmo’s clear satin wax oil on all surfaces.

I was pleased with the finish. The trays appeared translucent when held towards the light and opaque when on a solid surface. An added bonus was the unusual patterning in the resin. I have an idea why this occurred but will try and replicate the effect if I decide to revisit this design. 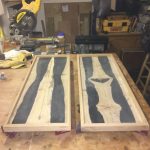 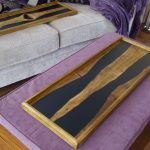 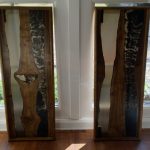 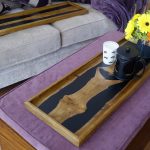 One tray has found a new home and the customer’s photos show it being used as I imagined. It’s always great to receive photos and 5 star reviews from happy customers!